Homepage » Blog » GREAT VICTORY OF INDIAN FARMERS: A LESSON OF RESISTANCE TO FIGHT BACK AGAINST CRONY CAPITALISM

Taken together, the three legislations loosen regulations on the sale, pricing and storage of agricultural produce. They allow farmers to sell outside mandis notified by the Agricultural Produce Market Committee. They enable contract farming through deals with private sector companies. They take food items like cereals and pulses off the list of essential commodities, lifting stock limits on such produce.

Farmers and traders stressed that the government wants to discontinue the minimum support price regime in the name of reforms. They fear that the laws will leave them at the mercy of corporate powers. The government has maintained that farm laws will bring farmers better opportunities and usher in new technologies in agriculture. 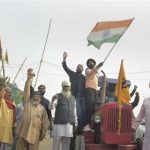 Protests had erupted against the laws in many parts of the country. When two of the legislations were tabled during a chaotic session in Parliament on September 20, some Opposition MPs claimed that they would prove to be the “death warrant” for the agricultural sector.

The government claims the new laws would give farmers the freedom to sell in the open market. But farmers say the laws will weaken the minimum support price mechanism under which the government buys agricultural produce, leave farmers to the mercy of market forces and threaten food security.

Most Opposition parties and farmers’ organisations across the country have strongly opposed the bills. The Shiromani Akali Dal, one of the Bharatiya Janata Party’s oldest allies, pulled out of the National Democratic Alliance in protest against these bills.

The ruling party, the BJP tried its best to break down and to damage the protests by resorting to all kinds of trick. Initially, farmers were threatened with counter protests at the Singhu border as well as Tikri border when local goons were brought in to protest under the pretext that it was disturbing traffic and creating problems for the locals. Then came the historic day. The Farmers decided to march on in Delhi on the Republic Day on their tractors. Police hesitantly gave them permission and created chaos at the Red Fort. The government got a handle to suppress the movement as anti-national threatening to take ‘stern’ action against the ‘terrorists. Every effort was made to instigate the locals against the farmers. A swift police action was being planned at all the three border areas.

Bharatiya Janata Party-led governments in Haryana and Uttar Pradesh had tried to prevent the farmers from crossing state boundaries to no avail as the farmers burst through the barricades, met with police batons, tear gas and water cannons. 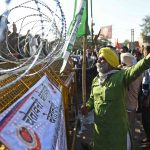 Some members of the ruling party went further in their attempt to discredit the profestors. Haryana Chief Minister Khattar claimed that the government had received reports that the ranks of the protestors included a “Khalistani presence”, claiming that separatists who want an independent Sikh homeland had joined the agititation.

This claim, for which no evidence has been offered, has been amplified by many news channels. It has hurt and outraged the protestors.

The massive participation of the farmers from Western Uttar Pradesh, Uttarakhand and Haryana actually had succeeded thanks to Bhartiya Kisan Union led by Rakesh Tikait became more vocal and participated with greater strength

Under the leadership of Rakesh Tikait, the farmers were agitating for the repeal of these three laws. The farmers had made it clear that nothing less than repealing these laws was acceptable. The central government discussed the amendment to address the concerns of farmers. He also promised to postpone the law for two years but the farmers did not agree to end the agitation. This was also mentioned by Prime Minister Modi in his speech.

In the last one year over 750 farmers got killed in these peaceful protests. Anyone who is aware of the extremities of north Indian weather can vouch how difficult and hard it would have been for men women and children of all ages, to sleep under the open sky in hot humid months from April onwards, followed by a rainy season in Monsoon and again extremely cold weather particularly from December to February. Many farmers died due to chilled weather and so many others were compelled to commit suicide.

One should not forget how the media was ‘monitoring’ everything at the protest sites. Media became a lapdog of the government by merely broadcasting stories to malign the opponents and glorifying the ‘supreme leader’. All this only created an extremely insensitive society where deaths and brutality have been normalised. ‘Fakenews’ ‘reporters’ were pushed to the protest sites to bring stories of dissent among farmers as well as to ‘show’ the ‘world’ how ‘lavishly’ the farmers were living at these protest sites. It was said that the farmers were drinking milk, eating dry fruits and living in luxurious AC Huts. Many times, it was also shown as if they were not farmers but goons and terrorists but that failed

US LONG HISTORY OF PLOTS AND CONSPIRATIONNISM

HOW US AND NATO FANNED THE FLAME OF WAR IN UKRAINE?