Putin’s decision to launch military special operations in Donbass and Ukraine did not come out from nowhere.

On Monday, February 21st President Putin, also acting on the request of the Donbass Republics, and the recommendation of the Russian Security Council, made the momentous and logical decision to do exactly that.The Minsk Agreements, though supported by Russia, were being impeded and sabotaged by some European nations, by the Kiev regime and the USA. Since 1999,Putin witnessed the dismembrement of Yugoslavia,bombing by NATO of Serbia in 1999, American invasion of Afghnaistan in 2001,Iraq invasion in 2003,color revolution in Georgia in 2004 and in Ukraine the same year, color revolution in Georgia in 2008, the so called Arab Spring in 2011 used by the US and NATO to topple Libyan regime and the Syrian regime. Putin witnessed also NATO expansion in Eastern Europe whose members went from 16 after the demise of the USSR to 30 today. 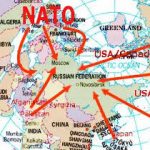 The Americans and their satellites states go further and claim a right to expand their alliance, but on what legal, moral or security grounds this right is based they cannot say. They claim that nations have the right to join NATO of their own free will, but this again is a distortion of the facts. The NATO Treaty states that accession to the Treaty is by invitation only. So there is no right of any nation to freely choose to join NATO. That is a decision ultimately controlled by NATO, by the United States in fact, not the nation seeking to join.

Earlier this year President Putin sent to the American president a proposal for a Treaty which would guarantee the peace in Europe. The offer was met with contempt and rejected out of hand by the Americans who played games with the text and offered to negotiate on peripheral items, while ignoring Russia’s demands that NATO cease its expansion, withdraw American nuclear weapons from Europe, dismantle the bases and equipment it has placed all over eastern Europe in preparation for war on Russia and agree not to place missile systems close to Russia’s borders.

On December 17, 2021, the Russian Foreign Ministry released draft agreements on the security guarantees that Moscow expects to receive from Washington and NATO. The documents clearly require that NATO cease its eastward expansion and return its military infrastructure to the 1997 borders.The proposed measures include guarantees that NATO will not advance eastward, including the accession of Ukraine and other countries into the alliance, as well as non-deployment of serious offensive weapons, including the nuclear one

The United States and NATO handed their written responses to Russia’s security proposals over to Moscow on January 26, 2022 without any crucial concession.

Moscow’s reaction to Washington’s response on security guarantees published on February 17 underscored that the US provided no response to Russia’s proposal to bring back nuclear weapons to its soil, but just agreed to deal with the issue of non-strategic nuclear weapons without taking into account the specifics of its location

On February 24, Russian President Vladimir Putin announced a special military operation based on a request from the heads of the Donbass republics. The Russian leader stressed that Moscow had no plans to occupy Ukrainian territories and the goal was to demilitarize and denazify the country.

On the morning of February 24, Russia officially launched a “special military operation” against Ukraine, designed, as Russian President Vladimir Putin explained, to “demilitarize” and “denazify” the neighboring state. The goal of the operation is to protect the people of the Donetsk and Lugansk People’s Republics (DPR and LPR), he said. The Ukrainian authorities subsequently severed diplomatic ties with Russia, urging its partners to create an “anti-Putin” coalition against the Russian troops entering Donbass and shelling military infrastructure facilities throughout the country. On the evening of February 24, the press service of the Ministry of Defense reported that DPR and LPR troops advanced 6-8 km from the front line with the Armed Forces of Ukraine, and the Russian armed forces completed all the tasks assigned for that day. Also, two Su-27 and two Su-24 aircraft, as well as one helicopter and four Bayraktar TB-2 UCAV belonging to Ukraine were shot down, and 83 ground military infrastructure facilities of Ukraine were incapacitated.

So far, the US, its satellites states and NATO are waging hysterical propaganda against Russia and Putin becoming in the West Putler(Putin = Hitler) The question of when the DPR and LPR will liberate their territories within the borders of the Donetsk and Lugansk regions, as written in their Constitutions, remains open. In addition, Russia’s military operations should should change regime in Kiev and set up buffer zone including the entire left bank of Ukraine, as well as its Black Sea regions. Dnepr, Zaporozhye, Mariupol, Odessa, Ochakov, Nikolaev, Kherson, and other cities that have industrial and defense enterprises essential to the Russian Federation. If they are controlled by Moscow, this means that Russia has defeated the West and taken its Slavic partner out of the sphere of influence of the United States and NATO.

« THE ROOTS OF UKRAINE’S WAR IS PUTIN CRAZY AND MADMAN BY LAUNCHING SPECIAL OPERATIONS IN UKRAINE? »

STOP CALLING THE CAPITALOCENE, AN ANTHROPOCENE

THE QUAD, AN”ASIAN NATO” TO CONTAIN CHINA IN THE ASIA PACIFIC REGION