On September 24, President Biden hosted Prime Minister Scott Morrison of Australia, Prime Minister Narendra Modi of India, and Prime Minister Yoshihide Suga of Japan at the White House for the first-ever in-person Leaders’ Summit of the Quad. A the top of their agenda the COVID-19 pandemic, infrastructure; the climate crisis; emerging technologies, space, and cybersecurity; and last but not least, fellowshi consisitng of cultivating 100 selected students(25 from each QUAD member) to be trained in the USA universities. 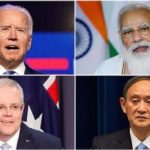 THE QUAD, CONTINUATION OF THE TRUMAN DOCTRINE OF CONTAINMENT OF COMMUNISM

The father of the containment is not Truman nor John Foster Dulles but George Kennan who was considering the soviet union and the communism as evil and conspiratorial trend within “liberal democracy” For that reason, Kennann had preached continued fight against the USSR and communism by confronting the Russians with counterforce at every point and to block the Soviet Union with “superior force and with “unassailable barriers in its path”

The policy of containment was supported and implemented in 1947 by the Truman administration asserting the need to “act and act decisively” to sustain the open Door policy. As the direct descendant of Churchill militancy anti Russia “Iron curtain” speech of march 1946, the Truman doctrine blamed the Soviet Union for the troubles of the world and announced the determination of the united States to halt the spread of revolutionary radicalism. As a result, Truman administration had elaborated a program to promote “trouble on the other side of the Iron curtain” Consequently, as Acheson revealed to the Congress, the cold war was inevitable. 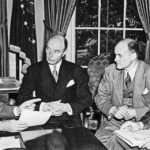 George Kennan(Left),father of the containment and the politician who coind the term of “Cold war”

The QUAD is a new military alliance targeting China in the Asia Pacific region like NATO set up in 1949 with the main objective: containing the Soviet Union in Europe. Long after the triumph of the Revolution in China, a large part of the American people refused to accept the result. After the fall of China to communism in October 1949, Truman Doctrine was activated to contain the new born communist revolution in China. The USA initiated the Korean war in 1950 with the hope to put a break to the rising tide of revolution in Asia. The snowballing effect of communist triumphes might make Thailand and Burma relatively easy conquests. Since Indi China is strategically the key to all South East Asia. A communist sweep in asia would tend to “paralyse the defense of Europe”. In West europe the feeling might well spread that resistance to the Red ” wave of the future” was hopeless. Thus far the Truman Doctrine had been enforced, but il had been a dismal failure in east Asia. these considerations were sufficient to induce resolute action in Korea. 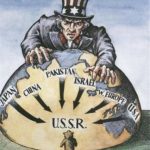 Truman doctrine of containment of communism

QUAD, US TOOL TO CONTAIN RISING CHINA IN THE ASIA PACIFIC REGION

The Quad has been described as a U.S.-led project, an alliance, an axis of democracies, a security diamond to contain China. The story of the QUAD has begun in spring 2007 by quadrilateral discussion followed later by a naval exercise in the fall of this year. In 2006, Japanese prime ministerial candidate Shinzo Abe made a more limited but focused case for a values-based foreign policy and closer ties with Australia and India. Once Abe won the election, his foreign minister Taro Aso reiterated this call in a speech laying out the new government’s foreign policy. In December 2006, Indian Prime Minister Manmohan Singh visited Japan. In a joint statement, he and Abe noted “the usefulness of having dialogue among India, Japan and other like-minded countries in the Asia-Pacific region on themes of mutual interest.” Then, reports emerged that U.S. Vice President Dick Cheney, despite hesitation in some quarters in the Bush administration, endorsed the idea of a quadrilateral involving Australia, Japan, the United States, and India — in addition to the Trilateral Strategic Dialogue that the first three had started in 2002. He discussed it with Prime Minister John Howard on a visit to Australia in February 2007. When Howard visited Tokyo the next month, he and Abe highlighted the four countries’ shared democratic values. A few days later, the Indian foreign minister visited Japan, and then, in April, Aso traveled to India and Abe to Washington. The Australian participant later described it as an “informal meeting … to look at issues of common interest” (like disaster relief) involving countries that “share some values and growing cooperation in the Asia-Pacific.” 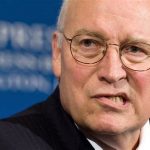 The meeting might have been exploratory, but observers thought it was or could be much more. Australian members of parliament asked if this was a security arrangement, an alliance, or an expansion of the Trilateral Strategic Dialogue. Indian lawmakers wanted more details on this “four-cornered dialogue.” Advocates and critics suggested it was an “Asian NATO” to constrain China.

There was still momentum behind the Quad. When Abe visited India in August, he didn’t explicitly mention it, but told the Indian parliament, “the Confluence of the Two Seas is coming into being.” He spoke of a “broader Asia” that would also incorporate Australia and the United States. The quadrilateral found more explicit mention in the United States that fall, when presidential candidate Sen. John McCain wrote that he would “institutionalize” the Quad 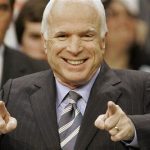 Before the recent meeting of the Quad, both the United States and the Indian sides denied that it was a military alliance, even though the Quad countries conduct joint naval exercises—the Malabar exercises—and have signed various military agreements. The September 24 Quad joint statement focuses more on other “security” issues: health security, supply chain and cybersecurity. 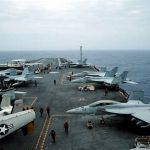 Before the Quad meeting in Washington, the United States and the UK signed an agreement with Australia to supply eight nuclear submarines—the AUKUS agreement. Earlier, the United States had transferred nuclear submarine technology to the UK, and it may have some subcontracting role here. Nuclear submarines, unlike diesel-powered submarines, are not meant for defensive purposes. They are for force projection far away from home. Their ability to travel large distances and remain submerged for long periods makes them effective strike weapons against other countries.

The AUKUS agreement means that Australia is canceling its earlier French contract to supply 12 diesel-powered submarines. The French are livid that they, one of NATO’s lynchpins, have been treated this way with no consultation by the United States or Australia on the cancellation. The U.S. administration has followed it up with “discreet disclosures” to the media and U.S. think tanks that the agreement to supply nuclear submarines also includes Australia providing naval and air bases to the United States. In other words, Australia is joining the United States and the UK in a military alliance in the “Indo-Pacific.” 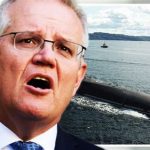 Behind the rhetoric about the Indo-Pacific and open seas is the U.S. strategic vision to project its maritime power against China and contest for control over even Chinese waters and economic zones. This is the 2018 U.S. Pacific strategy doctrine that it has itself put forward, which it de-classified recently. The doctrine states that the U.S. naval strategy is to deny China sustained air and sea dominance even inside the first island chain and dominate all domains outside the first island chain. .

The U.S. is using the other members of the Quad as mere tool to regain its strategic and global dominance. The United States wants to use the disputes that Vietnam, the Philippines, Indonesia, Thailand and Malaysia have with China over the boundaries of their respective exclusive economic zones. The same strategy used by the United States to use European continent as bullwark against the Soviet Union. That is why old colonial UK, France, Germany and today the United States all have large aircraft carriers: they are naval powers who believe that the gunboat diplomacy through which they built their empires still works. The United States has 700-800 military bases spread worldwide; Russia has about 10; and China has only one base in Djibouti, Africa.

GREAT VICTORY OF INDIAN FARMERS: A LESSON OF RESISTANCE TO FIGHT BACK AGAINST CRONY CAPITALISM Faouzi Elmir 21 November 2021