Like in all previous wars waged by the United States,its proxy allies and NATO, since the collapse of the USSR, it is the same strategy of deception implemented, aiming à brainwashing the masses in the West,making believe that their deadly and bloody wars of agression against targeted nations have only double objective :getting rid of vilain dictators who were massacring and killing their people, and making the world safe for democracy. 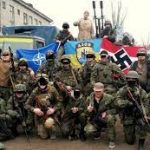 The current war in Ukraine provoked by NATO expansionism since the collapse of the Soviet Union on one hand and Maidan neo nazi coup in 2014 toppling democratically elected president who refused to bind to drastic conditions imposed by the USA,European Union and International Monetary Fund. The main architect of Maidan neo nazi coup was Victoria Nuland, wife of the neoconservative Paul Kagan.The Maidan coup was openly supported and financed by NATO as a way of undermining any Russian influence in Moscow’s own strategic environment. The aim was to make Ukraine a puppet state, commanded from Washington, ending any link with Russia. There was not only the objective to annihilate political, economic, and diplomatic relations between Kiev and Moscow, but also to eliminate cultural, ethnic, religious, and linguistic ties between both nations.

In the wake of Maidan coup d’etat, an anti-Russian junta took power and institutionalized a racist and anti-Russian ideology.Kiev’s coup in 2014 is but a contemporary copy of Hitler’s Berlin, but that the neo-Nazi element is a fundamental point of post-2014 Ukraine.

Following Maidan’s coup, neo nazi militias became  key points in the defense of the new Ukrainian regime. Groups such as the Azov Battalion, C14 and the armed militias of rightist parties such as Pravyy sektor and Svoboda operate freely in Ukraine and are most responsible for the extermination of ethnic Russians in the Donbass. The exaltation of Stepan Bandera (Ukrainian anti-Soviet nationalist leader who collaborated with Nazi Germany) is one of the symptoms of this. Before the Maidan, Bandera was a name like any other in Ukrainian history, but he came to be remembered and venerated as a national hero by neo-Nazis and anti-Russian politicians. These groups act with more violence and using more sophisticated equipment than the Ukrainian armed forces themselves, being the real face of Kiev’s anti-Russian brutality. As neo-Nazis, these militias have no obstacles in complying with the government’s objective of destroying any ties between Russians and Ukrainians.

The inspiration for Maidan neo nazi militias comes from the original Nazism: the Schutzstaffel (SS), one of the largest German armed political forces during the 1930s and 1940s, but the group was not part of the German Armed Forces, but a paramilitary militia instrumentalized by the government apart from the official troops. There was a major strategic objective with this: while the German military was commanded by the government, the SS fought for the Nazi Party and for Hitler – that is, if Germany surrendered, the SS would declare war on the German military. This type of “double-shielded” military system is the same one that Kiev has implemented: one can observe the same phenomenon in current war in Ukraine where neo nazi militias continue fighting the Russian forces in Kiev, in Dombass, in Mariopul and other regions albeit the entire destruction of Ukraine’s air forces.

Putin’s war over Ukraine is not war of agression like all NATO’s since 1991 mais it is the right response to denazify a neighbour country and to replace it a friendly regime. It is a measure that should be taken in coalition by several countries. In the West, Nazism has been rehabilitated and nazi groups and parties are encouraged as a mean to stand in the way of genuine left wing parties like in France with Le Pen. Russia is simply no longer willing to put up with crimes being committed by neo-Nazis against its people and there is nothing wrong with that decision

THE UNAVOIDABLE REGIME CHANGE IN KIEV TO DENAZIFY UKRAINE