“I argued that liberal democracy may constitute the “end point of mankind’s ideological evolution”and the”final form of human government, ” and as such constituted the “end of history.” That is, while earlier forms of government were characterized by grave defects and irrationalities that led to their eventual collapse, liberal democracy was arguably free from such fundamental internal contradictions. This was not to say that today’s stable democracies, like the United States, France, or Switzerland, were not without injustice or serious social problems. But these problems were ones of incomplete implementation of the twin principles of liberty and equality on which modern democracy is founded, rather than of flaws in the principles themselves” Francis Fukuyama, the End of History,

Following reactionary counterrevolutions that took place in 1989 in the Socialist Block, Francis Fukuyama wrote for the National Interest an article entitled “the end of history” identified with the triumph of what he called it “liberal democracy” over communism qualified of dictatorship. 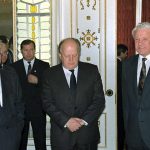 « GREAT VICTORY OF INDIAN FARMERS: A LESSON OF RESISTANCE TO FIGHT BACK AGAINST CRONY CAPITALISM THE ROOTS OF UKRAINE’S WAR »

F.VON HAYEK AND IDEOLOGICAL ORIGINS OF THE CONSERVATIVE REVOLUTION